Greetings from the great state of Maine! I’m back in action to recap the Old Port Half Marathon I ran in Portland, ME last weekend. First of all, apologies are in order. I 100% lied about taking this race nice and easy and not gunning for a PR, and I blame it on the weather. For spectators, it was an awful day–rainy and chilly and in the low 60s. But for us runners, this was fantastic! Just enough rain to cool us off without being too chilly.

We arrived Friday to pick up our bibs at the expo, which wasn’t much to speak of but it was a good chance to get a sense of where the starting line was. After a delicious dinner at the original Otto Pizza (zomg the best gluten free pizza–check out this baby with pear, blue cheese, and arugula), we convened to cheer on my buddy Bry’s cousin Travis, who was running in the finals for the men’s steeplechase at the Olympic trials. It was super fun to watch him run and get ourselves psyched up for our race! Bry and I ran the half with her dad, while her sister ran the 5k. Plus boyfriend spectators, we had a nice crew and it was a great pre-race evening.

After calling it a night and heading back to our AirBnB, we got up just before 6 the next morning to head down to the waterfront for a 7am race start. Other than a long bag check line (as per usual), the logistics were really seamless–we were able to zip right into the portopotties (no lines!) and slot ourselves into our corrals. I lined up in between the 1:40 and 1:50 signs, and we were off! The first few miles were easy warmups, and then we hit the hills. Miles 2-4 and 6-7 of this race are really hilly, so I kept my effort at a medium level, although I noticed that without working too hard I was averaging well under my 8-minute goal pace. 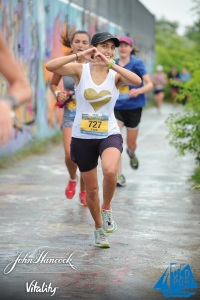 Given the amazing conditions and the fact that I was feeling strong, I figured I might as well shoot for the moon and give a PR a whirl, especially as the showers picked up and despite the hard effort I wasn’t hot or sweaty. I picked a couple of strong-looking folks to pace behind and held onto decent paces–and then started doing math in my head which led to me believe that a couple of fast final miles would lead me to PR. I dug deep and ran a 7:09 and a 7:03 for miles 12 and 13.

Despite my watch saying differently, I clocked an official time of 1:40:29–two seconds slower than my PR, 12th in my age group and 45th woman overall. Not PR-ing was a little bit of a letdown, but this race felt relatively easy and I’m pleased to see that I was able to hold onto my time without my brother there as a pacer, like he was at the Hyannis Half Marathon.

After the race, we celebrated with coffee, lots of donuts (from the Holy Donut–the BEST both gluten free and regular donuts) and some extra gf treats from Bam Bam Bakery. All told it was a lovely race in a super fun city–despite the hills and rain! And a fantastic way both to make my official race debut as a member of the Heartbreakers and to celebrate Bry’s big birthday.

Onwards and upwards to more marathon training fun. Sub-1:40 half marathon, this fall you are MINE!

Linking up with Patty, Erika, and Marcia for Tuesdays on the run.