I had one of the best races of my life! With very few goals in mind other than to nail my BQ, I walked away from yesterday’s race with a 3 minute PR, a BQ with a 9.5-minute cushion, and a second place trophy. It was a magical day and the result of a sweaty, exhausting summer of hard work. I’d say it was by far the best I’ve ever felt before, during, and after a marathon.

This whole story starts back in April, after the craziness that led me to drop out of the Boston Marathon at mile 21 (more on that here). I knew I wanted another shot at that finish line in 2019, which meant that I had to find another marathon to run before 9/10/18 (more on the insane Boston process is here if you’re unfamiliar). I started hunting for early fall races and came upon the Charles River Marathon, a super-small local race on a 10 lap course. It sounded perfect, but it was sold out. I emailed the race director to see if I could squeeze in, and he told me if I could raise  $150 for charity within the next couple of days I was in. I sent some frantic emails around and within 24 hours–I was ready to roll!

I spent the next month working with my PT and getting my knee situation under control. In the meantime, I did some poking around for local coaches. I love the coach I’ve worked with in the past, but I thought I could use a push and a change. And I needed someone to agree to coach me to a BQ in just 12 weeks–most people do at least a 16-week buildup. Luckily right around that time I saw that Anoush, a speedy local runner, was taking on new coaching clients. We emailed back and forth and I jumped into a two-week trial. I was all-in after that–her workouts were challenging but doable and she was 100% behind getting me to my goal.

Just as I dug into training, a couple of things happened that could have thrown me off–first, we bought a house, and second, we had one of the hottest and muggiest summers on record. The easier choice would have been to give up–sleep in, skip workouts, and not push hard in the heat. But I didn’t go that route. I stuck to the plan, I stubbornly sweated it out day after day, and I executed. I wanted to know I had done everything I could to get to my goal.

As race day approached, I knew the weather was going to be good–and it turned out to be one of the coolest mornings of the summer. It was cloudy and in the low 60s and a little bit humid, but breezy. The race started at 7am and I had already picked up my bib, so J and I drove to the start with about 45 minutes to spare, which was just enough for a couple of bathroom trips and some pre-race photos with my teammates. At the start line, I sidled up to the 3:27 pace group so that I could see who was there–with just 200 people total, I wanted to have a sense of who I might end up running with. At a few minutes after 7, we took off on a little added loop before hitting the first full loop of the course. The 3:27 and 3:32 pace groups immediately shot off ahead of me. It was tempting to hang with them, but I had a solid race plan and I knew one of the cardinal rules is that you can’t bank time in a marathon–going out too fast almost always leads to disaster! So I hung back and promised myself I’d keep the pace above 8:10 for the first two loops/first 5ish miles. Splits came in at 8:11, 8:14, 8:10, 8:09, and 8:10. 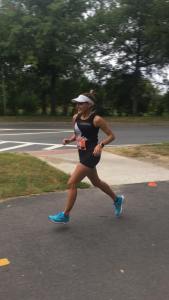 I grabbed my handheld water bottle from J along with my first Gu, and revved the pace up a bit faster for the next couple of laps. I got a little bit overexcited but could tell I was moving a tad fast, so I pulled back to keep it right around an 8-minute pace. In my head, I was telling myself to keep it steady and even and easy. I quickly overtook a few folks in front of me and clocked the next few miles at 7:46, 7:36 (oops), 8:08, 8:00, and 8:02. After more Gu and hydration (I carried my water every other loop or so–a huge perk of the looped course) I was ready to amp it up just a little bit more. 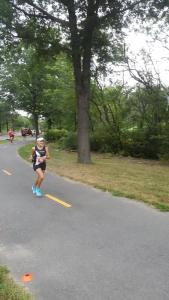 Loops 5 and 6 I was aiming for a just sub-8 minute pace. Again, I wanted to keep it feeling fairly comfortable and easy. I was mostly by myself at this point, so I focused on getting from Jeremy on one side of the loop to the Oiselle cowbell crew on the other. It was SO incredibly helpful to be able to see my cheer squads every mile or two! These miles came in at 7:53, 7:46, 7:48, 7:48, and 7:40. I didn’t have my watch give me individual mile splits, but I did know my overall average pace for the whole race, so I was able to run by feel during each mile while I made sure the average was where it needed to be. Loops 7 and 8 I held and kept it nice and steady–thing were starting to feel hard, but I got a big boost from a bunch of new and fun surprise spectators! It was so fun to see my friends Cait and Bry out on their long runs, and my parents had shown up with some fun signs 🙂 My splits for this section were 7:45, 7:53, 7:47, 7:31, and 7:40.

After having spent most of the race myself I found myself in lockstep with another female runner. With just a few words back and forth, we decided to stick together to get through what we could. We ran loop 9 together and it was so nice to have someone next to me (thank you, Shira, and congrats on your BQ!). I think marathons really start during the last 10k, so I kept it at what felt like a doable sub-8 pace. We ended up at 7:47, 7:49, and 7:48. As we crossed the start line into our last loop, I felt a rush of adrenaline and knew I had a little left in the tank. Then I heard someone yell out “you’re the third woman!” and something in me clicked into gear.

I set my watch so that I couldn’t see my pace and poured my heart into my legs–that last lap was for ME. I pushed through at a faster clip and as I turned the corner into the last mile, my brother appeared sprinting next to me.

The next hour or so was a blur–lots of sweaty hugs and kisses, a flurry of excited texts, tons of water, and accepting my second place plaque–it was just surreal. This race took a village, and I want to thank Jeremy, my rock and #1 fan, for supporting me every day in this crazy endeavor and for being the best race crew out there.

A big thank you to Anoush both for pushing me and pulling me back so that I could get across both the start and finish lines strong and healthy (if you need a coach, check her out here!) Lots of love to Alexa, Cait, Dana, Sarah N., Sarah D., Kelly, Amanda, Michelle, Jess, Nora, and the rest of my Oiselle Volee for being such amazing running buddies and the best goddamn cheer squad out there (seriously). And to my parents and brother for always being there.

I have another post coming along about what I did differently this training cycle that I think made it so successful, but I wanted to get these thoughts out there while they’re fresh.