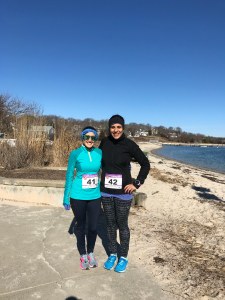 This past weekend, my running buddy Alexa and I ran the Martha’s Vineyard 20 miler. When I registered for Boston, I knew I wanted to do either this race or Eastern States, and MV won out since it would force me to get up to a 20 mile long run in before leaving for my honeymoon. TL;DR–this was a fantastic, well-run event and just the loveliest way to get a hard training run in!

Alexa and I headed down to Falmouth on Friday night, and stayed with my cousins before heading to the ferry terminal in Wood’s Hole nice and early. We ended up getting on the later of the two recommended ferries, which meant we had time to enjoy coffee at Pie in the Sky, a must-visit! We bought our tickets early and sauntered onto the ferry, which was comfortable and not too crowded. We even made some awesome ferry friends who were running the relay! 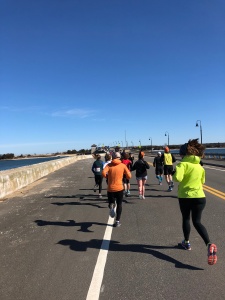 After a nice chat we made sure to use the boat’s bathrooms and walked off the gangway directly into the registration area. The bib pickup and bag drop were smooth and easy, and we were able to stay warm indoors at the ferry terminal, chatting with various running friends up until the race start.

After a loud gunshot blast, we were off! The first 10 miles of the race were beyond gorgeous–we were running along the shore on flat roads and paths, with amazing views of the ocean and the seaside homes. The weather was fabulous–in the upper 30s, sunny, and not too windy–and the first 10 miles were easy breezy. We treated this as a long run, not a true race, stopping to take water and fuel when we needed. 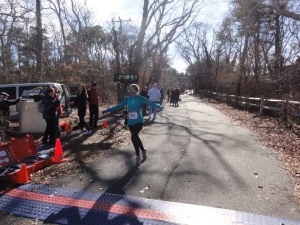 After the 10 mile mark we ramped it up for the first of three sets of MGP miles–just as the course got hilly and stayed that way until the end. We cranked it through three miles in the 7:30s and then hung together until mile 15, when I was feeling good enough to speed ahead. The only downside of the small race size was that I was pretty much alone for this last chunk–but the water stop volunteers and cops were awesome and I kicked it into high gear for the last three miles–7:38, 7:57, and 7:10. Overall, I finished at around an 8:10 average (according to my watch), feeling fairly strong and happy. 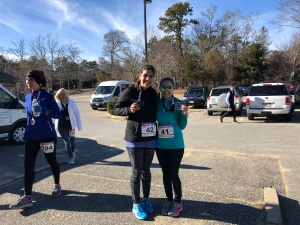 Alexa was there soon afterwards and we grabbed a quick bite at the post-race gathering (they had Mexican food and hot chocolate!) We made a quick run to the shuttle though when we realized we could make the early ferry back to the Cape. We had a quick and comfy ride back to the terminal, and then we settled onto the ferry for some well-deserved post-race beers. Back in Falmouth we grabbed some stellar grub at Anejo, and we drove the 90 minutes back to Boston and were home by 6:30.

We had just the best mini racecation, and I would recommend the 20 miler to anyone who is training for a spring marathon. The relay looked super fun for anyone who isn’t (it’s 2 10 mile legs). Next race recap will be coming at you from my first international race in NEW ZEALAND, mate!