I came up with this list without considering races of different distances, but oddly enough, it ended up including a 5 miler, a 10k, a half, a full, and a relay. I truly loved all of these races for very different reasons, so I’m going to list them from shortest to longest instead of ranking them, which I can’t bring myself to do 😉

Harpoon 5 Miler: This uber-popular race takes place every May, starting and ending at the Harpoon brewery. I had avoided it for years because I can’t drink beer and that seemed like the main reason most people ran (#celiacproblems). But I decided to give it a whirl last year and it was SO much fun!! The course is flat and wicked fast, you can run as part of a 6 pack team (you run individually, but your results count for team awards). I loved this race mostly because it was the first time I felt like I could really run fast, not just long. Also, I got to drink cider afterwards with J and a crew of our pals! Harpoon is the weekend of my marathon this year, so I won’t be running, but I can’t wait to be back.

Tufts Women’s 10k: I think this was one of the first race recaps I ever wrote! It’s also oddly the last 10k I did (back in 2014) so I need to fix that, stat. This is a fantastic, fast, all-women’s race that has been happening for the last 40 years (!) in Boston. I didn’t have a watch at the time, so I ran totally by feel and just enjoyed myself and ran for fun. Everyone was super encouraging and the 10k distance was the perfect challenge at the time. I really hope to get back out for this one soon!

Cambridge Half Marathon: I think this was the first time I’ve ever run an inaugural race, and it was so awesome! I was coming off of the frustration of just missing my goal time in Chicago and went into this local race with no goals other than to run hard and see what I can do. I was SHOCKED to run a 1:36! The course was perfectly varied and not too crowded, and it was so fun to run through a couple of my old neighborhoods. I am crossing my fingers and toes that this race happens again this year!!

NYC Marathon: I’m 1000000% biased on this one because NYC was my first full marathon, but oh my goodness is this one magical race experience! The crowds are wildly supportive and it’s so incredibly cool to run through every borough of NYC. I experienced pretty much every emotion in the book during this race and honestly don’t know if I would run it again (it’s expensive and kind of a logistical nightmare) but I think every runner should have this one on their bucket list. Once in a lifetime for sure.

Ragnar Cape Cod: First of all, a HUGE thank you to my amazing friend Megan for making this happen. She got a group of our coworkers and friends together for this insane, sweaty, exhausting 200 mile relay down the entire length of the Cape. I don’t know that I ever would have thought to do a Ragnar on my own but it was such a fun experience, mostly due to getting to run with an amazing group of ladies. You can read more in my recap, but suffice it to say that if you ever have a chance to do a Ragnar, say YES.

What are your favorite race memories? Got any tips on races I need to add to my bucket list?

Linking up with  Lacey, Meranda, and Rachel for the Friday Five 2.0.

Back in the fall, my running buddy M told me about this crazy 2 day relay race and asked if I wanted to help get a team together to do it. So for the past few months we’ve been recruiting, planning, and training hard to get our fabulous team off the ground. Check out that good lookin’ group of badass ladies! 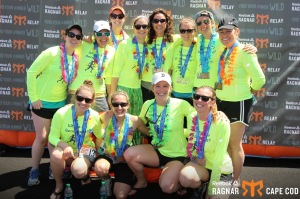 The concept/logistics of a Ragnar are a little bit hard to wrap your head around until you’ve done one, but the idea is that you have a team of 12 runners split up into two vans. Everyone in the first van runs, handing off at designated checkpoints, and then they head to eat/rest while the six runners in the second van each take a turn. The vans leapfrog the runners to make sure the next runner is ready for the hand-off at each exchange. 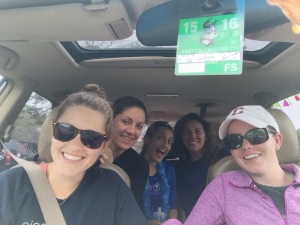 This is repeated until each runner has gone 3 times. When the process is over, there has constantly been someone running for 30-ish hours and the team has covered around 200 miles. Individual legs vary between 2.5 and 10.5 miles, with the total mileage per runner ranges from 12-22 miles. Got it? No worries… neither did I about a week ago!

I have to say, I had some skepticism about this race. I usually don’t love “gimmicky” races like obstacle courses or themed events like the color run, but Ragnar was a blast! A smelly, sleep deprived blast. Here’s how my 17.5 miles went down over the course of the two days.

Leg One: Friday at 5:30 p.m., 4.84 miles across the Bourne Bridge. As runner number 12, I was the last person on our team to tackle their first leg. I was pretty antsy to get started, since I had been cheering on my teammates since the morning, and despite the humidity and fog I happily sped off along the banks of the Cape Cod Canal. Most of my legs had been classified as “hard” since the van couldn’t drive next to me, but I liked doing some of the running solo on bike paths and trails. I took a quick and weird spin through a trailer park and scooted past traffic and up and over the bridge–officially entering the cape! I finished at an 8:15 average pace just as the raindrops began to fall.

After leg one, our team had a few hours of break time, so we did some googling and beelined it to Bobby Bryne’s in Mashpee for dinner. Having eaten peanut butter sandwiches and granola bars all day, we were thrilled to be indoors and eating a full meal. After a pit stop for blister supplies, we drove to a local high school to get a couple of hours of sleep before we started running again. Most of us had barely drifted off when we had to don our reflective gear and head back into the van to begin our rainy, nighttime legs around 11 p.m.

Leg Two: Saturday at 2:30 a.m., 3.15 miles in Harwich. Being runner 12 came in handy for my night run, since the rain had mostly let up by the time I started. As required, I pulled on my reflective vest, headlamp, and taillight before taking off down a quiet street. It was pretty eerie running in the dark, especially since part of my route was along a pitch-black bike path. I ran with a couple of other ladies for part of the leg and then passed them (in Ragnar parlance we call people you pass “kills,” short for roadkills). I wanted to get the leg over with ASAP! As I was nearing the handoff point, I heard my teammates yelling and pointing at one of the runners I had passed, who was speeding towards me and gaining on me. Somehow my sleep-addled brain clicked into competitive gear and I yelled “OH HELL NO!” and sprinted towards the exchange. You know, it’s not about winning… until sometimes it is 😉 I finished the short leg at an 8:19 average pace.

At this point, we were all really ready to crash, so we headed into the local high school gym, rinsed off in the showers, and then attempted to get some shut-eye. Despite ending up next to one of the loudest snorers I’ve ever heard (how is it that those people don’t wake themselves up???) I shoved in my earplugs and passed out for a couple of hours. At 5 a.m. my teammates gently shook me awake and we waited in a long, smelly Dunkin’ Donuts line before getting ready to begin our final legs.

Leg Three: Saturday at 11:00 a.m., 9.5 miles from Truro to Provincetown. The weather Saturday was gorgeous–75+ degrees and clear and sunny. While cheering my teammates on during their last legs, I focused on getting in as much hydration as I could (btw, I highly recommend unflavored Nuun tablets). The run, as expected, was incredibly beautiful (this is literally the very end of the Cape, and most of my run was right along the water) but the sun was unrelenting–I didn’t have any shade the entire time.

Despite being sleep-deprived and warm, this run was amazing–SO scenic, and the best part was that my entire team joined in to run through the finish line together. I managed to wrap up this leg up with an 8:46 average pace.

So would I do it again? You’re damn right I would. I loved the challenge, adrenaline, and camaraderie of the event–running can be such a mental struggle when you’re all on your own, and I can’t say enough about the team aspect of the event. In fact, team #wheremybeachesat loved it so much that we’re aiming for another race in the fall–click here to vote for our photo and help us with a free trip to the Adirondacks race! There were definitely a lot of lessons learned, too–keep an eye out for a future post on what I would do differently next time. Off to rest up before the Harpoon 5 miler this weekend!